DUE TO THE GOVERNMENT LOCK DOWN BIG DAN'S AIRGUNS WILL BE
CLOSED UNTIL FURTHER NOTICE.
WE APOLOGISE FOR ANY INCONVENIENCES.
THANKS AND STAY SAFE!
Zbroia Air Rifles (Huma) 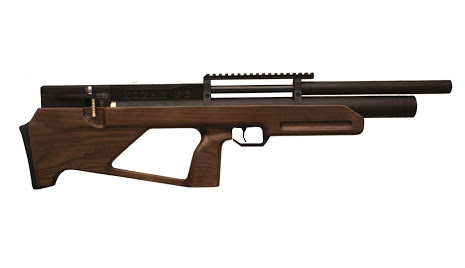 Zbroia Kozak FC
The all new Kozak! The Kozak FC is an even lighter and faster handling version of the already well loved Kozak. The Kozak FC is also a fully fledged bullpup with the cocking lever being placed directly at the rear of the action allowing the FC to be even more compact than the standard Kozak!
The Kozak FC also features Zbroia's sweet two stage adjustable trigger that can be set to suit each shooters individual preference further enhancing the rifle's consistency.
The FC comes with a regulator as standard that gives the rifle an incredibly high shot count.. especially for a rifle of this size! We'll be testing the exact shot count in our upcoming review!
If hunting will be on the agenda or you have nosey neighbours then another brilliant addition with the FC is that the rifle's shroud is also baffled making the FC whisper quiet out of the box, if that still isn't quiet enough however the rifle comes with a threaded barrel to allow a silencer to be mounted so the rifle will not only have its internal baffles but a silencer on top! To say quieter than a mouse's fart doesn't do it justice!
Two multi-shot mags are included with the Kozak FC and the rifle is also available in the compact or longer version with the longer rifle not only boasting a longer barrel but also a longer air cylinder for an even higher shot count!
The stocks are made from the same eye catching ash that the standard Kozak's and Hortitsia's are made from making them truly stand out, the FC is available in the black ash and brown.
The Kozak's have already earned themselves a fantastic reputation thanks to their accuracy and performance and the FC is another further evolution of the line. The FC might be light and small.. but it leaves a huge impression!
Also available is our own Huma regulated Zbroia Kozak FC's which will come already fitted and tested for maximum performance.
Spec sheet,
.177 &.22 calibres available,     Length 70cm,            Weight 6lbs,       Regulated,       two stage adjustable trigger,       bullpup action,           Sidelever operated,       Weaver rail fitted,             Two magazines as standard,             Light weight,
Baffled shroud,         Threaded barrel,       Short and long versions available,          Black and brown ash stocks available.
Short barrel:£600. Huma regulator version: £700
Long barrel: £635. Huma regulator version: £735
Comes with a free tin of pellets! Contact us for more information, purchasing and RFD transfers!

Zbroia Kozak bullpup
A small rifle that is making big waves! Here at Big Dan's we're excited to be able to offer the Zbroia Kozak to our customers that are
looking for a compact and light weight rifle with a massive spec list. Whether you're a hunter or a target shooter you won't want to miss out on this one, especially considering the rifle's modest price tag!
Starting with the action the Kozak is a bullpup PCP rifle, this means that the action is more towards the rear of the rifle which means that despite its smaller size the Kozak can have a full length barrel without sacrificing balance or increasing the rifle's overall length.
Cocking the rifle is an incredibly simple task due to the rifle using a side lever loading system which will no doubt please shooters that like to take shots from a prone position, unlike a bolt which can be awkward to use when trying to keep low.
Moving on to features now the Kozak comes with a shrouded barrel that not only finishes off the rifle's looks but it also acts as a silencer keeping the Kozak whisper quiet. The Kozak also comes with a sturdy weaver rail for scope/dot sight attachments.
The Kozak is also regulated which not only boosts the rifle's shot count above 150 shots per fill but it also increases the rifle's consistency due to it eliminating the need to find the rifle's "sweet spot" in the rifle's air pressure band.
A two stage adjustable trigger has also been fitted to the Kozak giving the shooter better shot to shot consistency and can be tweaked to suit the shooters preference.
The stock of the rifle is also not only fantastic to look at but features an adjustable cheekpiece further enhancing the rifle's accuracy and consistency. Overall the Kozak is the perfect little rifle for those looking for a compact, accurate and tough little PCP with its spec list and shot count that puts many full sized rifles to shame!
Also available is our own Huma regulated Zbroia Kozak's which will come already fitted and tested for maximum performance.
Spec sheet,
.177 and .22 calibre's available,          Regulated,        Adjustable two stage trigger,             Bullpup,                 Side lever action,
Light weight,            weaver rail fitted,
£500, Comes with a free tin of pellets! Contact us for more information, purchasing and RFD transfers!
£600 Huma regulator version.
Kozak long barrel

For those who don't like compact bullpups but love the design on the Kozak! The Kozak is also available with an extended barrel turning it into a near full sized light weight rifle!
The extended barrel version is also available in a more traditional coloured wooden stock.
Also available is our own Huma regulated Zbroia Kozak which will come already fitted and tested for maximum performance.
Spec sheet,
.177 and .22 calibre available,       Regulated,         Two stage adjustable trigger,             adjustable cheekpiece,             Bullpup,
Side lever action,           light weight,       Weaver rail fitted,           dark and traditional stock available,
£535,  Comes with a free tin of pellets! Contact us for more information, purchasing and RFD transfers!
£635 Huma regulator version.
Kozak Walther Barrel 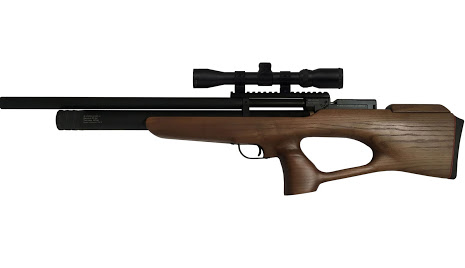 The ultimate version of the Kozak the Walther Kozak comes with one of the greatest airgun barrels on earth, the Lothar Walther barrel.
This barrel is known throughout the airgun community for its incredible accuracy and consistency turning the already incredibly impressive Kozak into a surgically precise air rifle.
The Walther Kozak is fitted with an upgraded walnut stock which is absolutely beautiful to look at.
The Walther barreled Kozak also comes with an extended air reservoir for an even greater shot count over the standard model. Make no mistake the Walther Kozak is a serious contender no matter the shooting discipline.
Also available is our own Huma regulated Zbroia Walther Kozak's which will come already fitted and tested for maximum performance.
Spec sheet,
.177 and .22 calibres available,           Two stage adjustable trigger,            Regulated,             Lothar Walther barrel,        Adjustable cheekpiece,              Bullpup,               Side lever action,           Light weight,        Weaver rail fitted,          Walnut stock.
£750,  Comes with a free tin of pellets! Contact us for more information, purchasing and RFD transfers!
£850 Huma regulator version.
Hortitsia Carbine 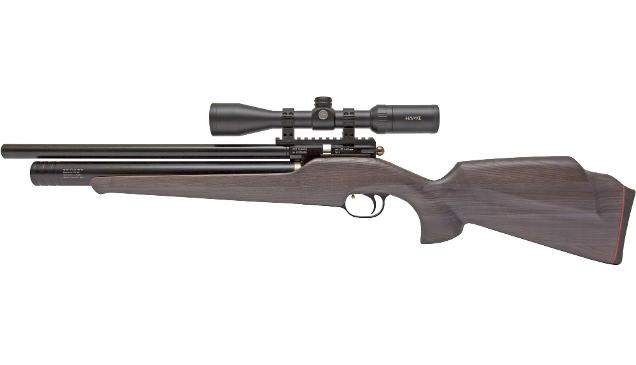 Hand Built in Ukarine the Zbroia Hortista infuses an ergonomic design with a hand full of features to make it one of the best PCP rifles at a mid range price on the market today.

The rifle features 2 x 12 shot magazines which are indexed with the smooth bolt action. This bolt is held in place with a secure catch making reloading quick and easy. When this is match with the two stage trigger you get a rifle that just as effective as a target shooting rifle as it is for hunting.

Coming with a variety of stock, calibre and barrel length the Zbroia Hortista looks the part as well as shoots it. The raised cheekpiece ensures your eye is in perfect alignment with the scope for accurate shooting. To further this high end rifle the barrel is fully shrouded to provide you with whisper quite shots.

To complete this the rifle comes with 2 magazines and 2 x filling adaptors, one with the standard 1/8th BSP thread, and another Foster quick fill connection.

Also available is our own Huma regulated Zbroia Hortitsia which will come already fitted and tested for maximum performance.

Comes with a free tin of pellets! Contact us for more information, purchasing and RFD transfers! 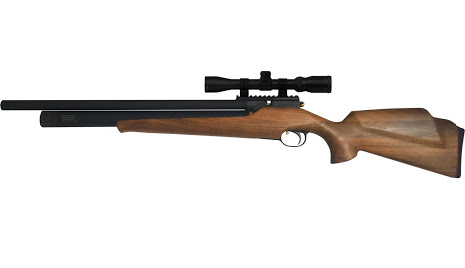 The Hortista from Zbroia is made to a classic sporter design and features a stock made from a choice of either Walnut or Ash wood is available in a range of colours. The stock is fitted with a raised cheekpiece and rubber buttpad to minimise recoil into the shoulder. The gun is full power and perfect for either target shooters or hunters.

The rifle is fitted with a full length barrel shroud that keeps the gun whisper quiet and the Lothar Walther barrel of the Hortista is widely regarded as one of the finest currently available on the market today. The trigger is crisp and predictable and also fully adjustable making the rifle perfect for almost anyone.

Also available is our own Huma regulated Zbroia Walther Hortitsia which will come already fitted and tested for maximum performance.

Comes with a free tin of pellets! Contact us for more information, purchasing and RFD transfers!