The Artemis M22 is a full power bolt action PCP Air Rifle which provides both hunters and target shooters with a serious tool for the job. The M22 is available in .177 and .22 calibers and comes with an adjustable two stage trigger with a built in re-settable safety and an 11 shot rotary magazine. The M22 also has a built in double regulator system boosting its shot count to 200 shots per fill! Rivalling air rifles well over twice the price.

The M22 is finished off with a bead blasted titanium barrel shroud that adds to the rifle's hardy, chunky looks, the shroud is also baffled which keeps the M22 whisper quiet straight out of the box. Overall the M22 is a strong, extremely accurate and dependable air rifle with class leading features at a low price. 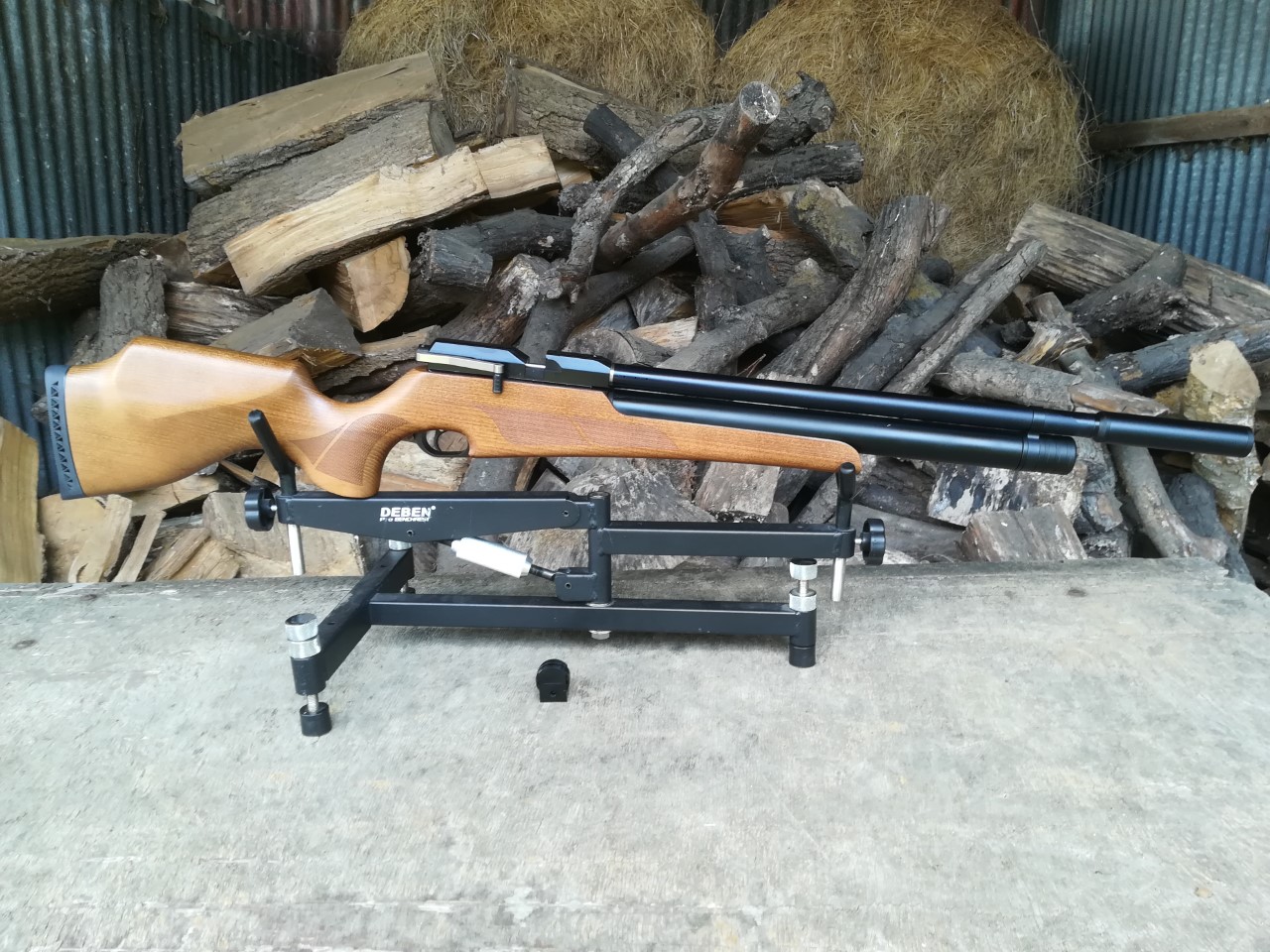 The M16 is the latest rifle from Artemis that is packed full of the features that'll make any PCP shooter grin. The stock is beautifully sculpted and features checkering for added grip in all conditions, at the rear is a ventilated butt pad for added comfort over longer shooting sessions. The M16 uses a side lever action which is far easier to operate than a bolt from the prone position. The M16 also comes with an adjustable two stage trigger and is fitted with a beautiful fully shrouded barrel that is topped off with a sound moderator. A regulator is also present on the M16 and with a full charge the rifle is capable of 115 full power shots in .177 putting it well above most of the competition at this price range. The M16 is quite possibly the best hunting rifle out of the box today with jaw dropping looks and performance.  Available in .177 and .22! 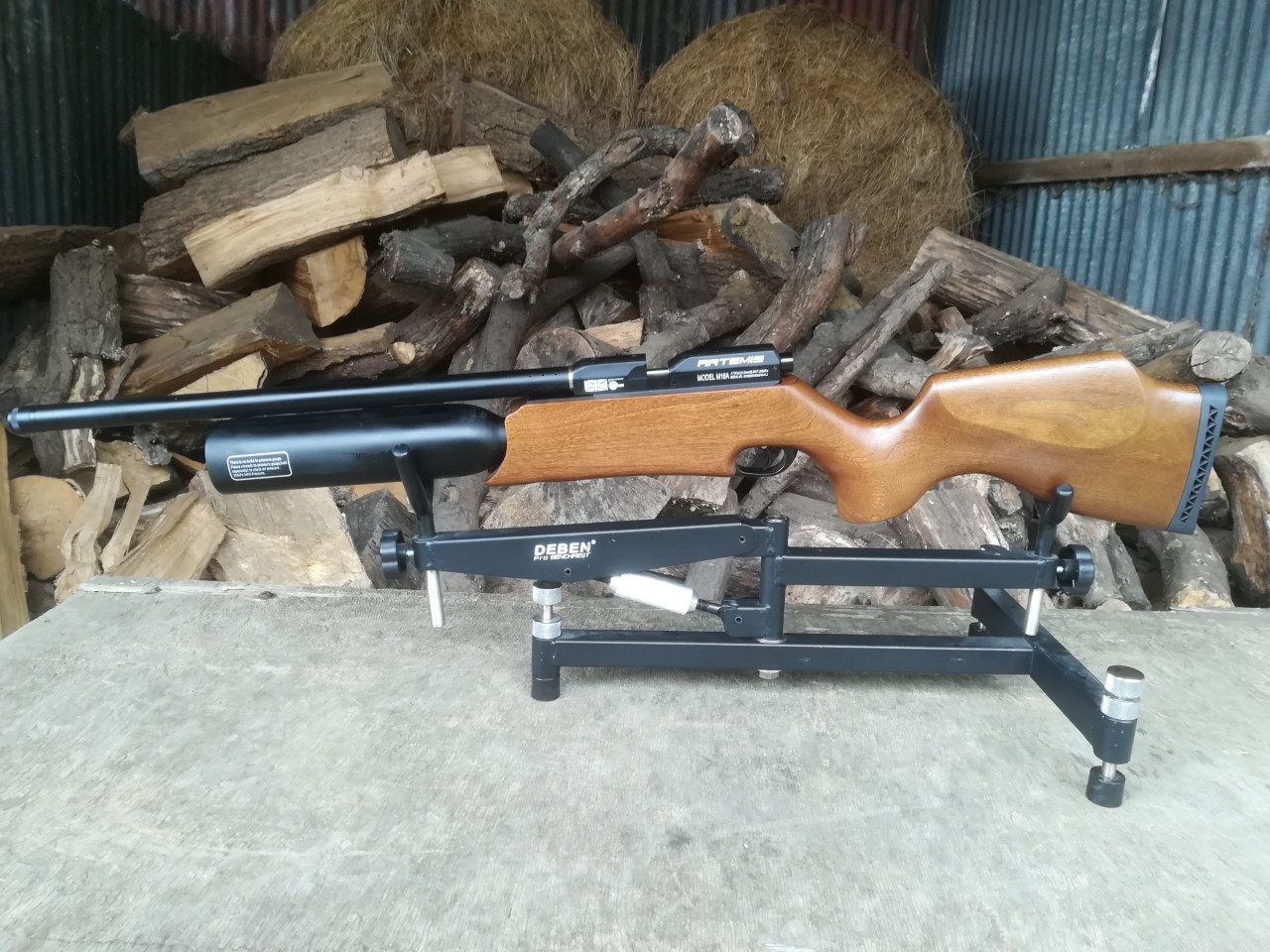 Artemis M16D
The latest evolution of Artemis's M16. The M16D further builds on the excellent foundation laid down by the super M16 rifle. The M16D differs from the earlier rifle by utilising a buddy bottle system instead of the standard cylinder. This increases the shot count up to 250 full power shots in .22 (200 in .177) and like the M16 the new D model is also fully regulated giving the rifle superb consistency.

The M16D's bottle is also removable and can also be refilled using a quick fill adapter. So no matter which fill system you prefer or use you can always fill the M16D.

The M16D is an exceptionally accurate rifle and has a spec list that trumps many rifles well over twice the price!

Comes with free tin of pellets! Contact us for an appointment to view/test the rifle or give us a call or text on 07598454971 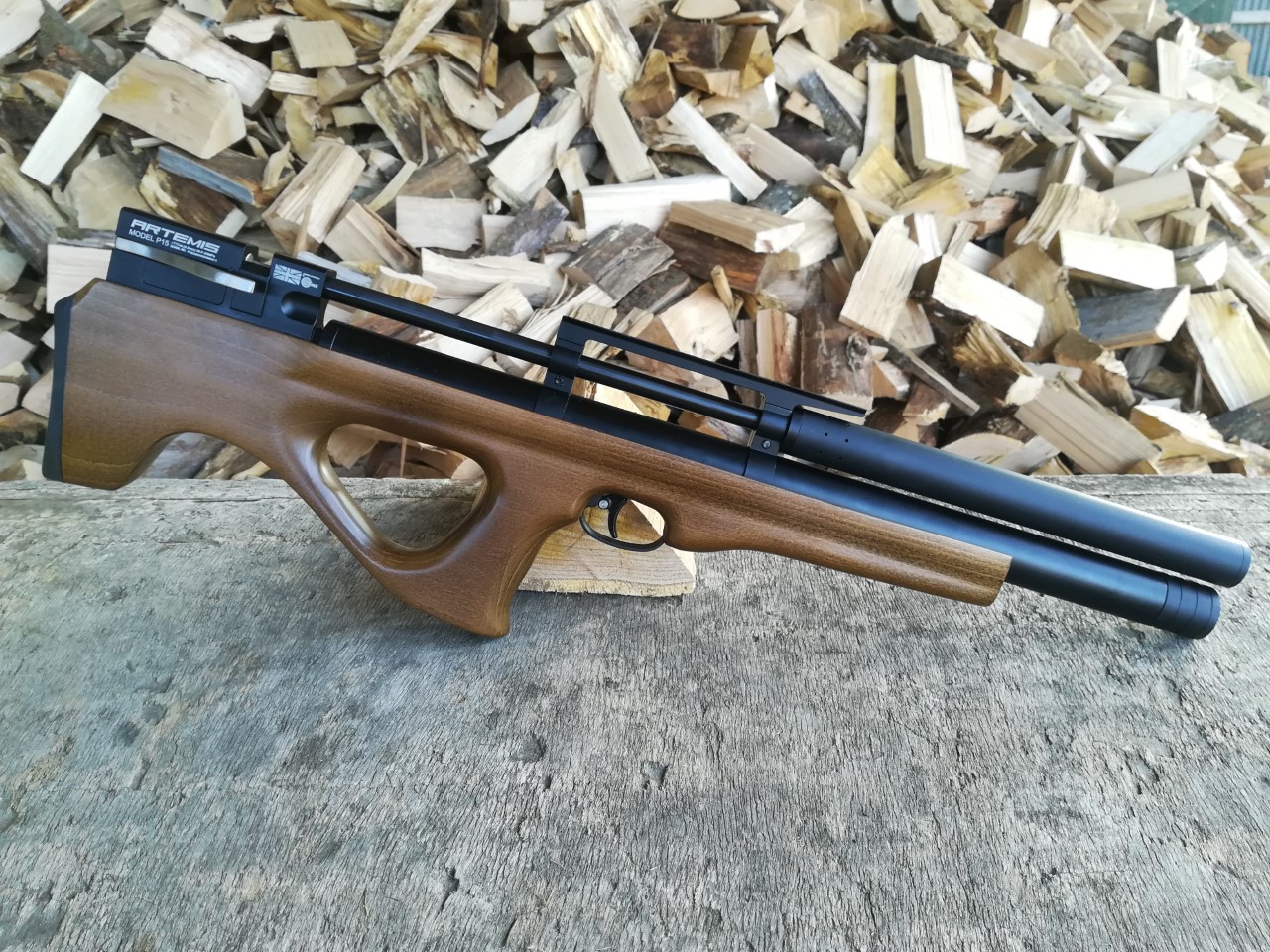 The Artemis P15 is compact bullpup air rifle which uses a side lever action. The P15 is incredibly light and comes with a half shrouded and baffled barrel which not only gives the rifle its chunky look but also acts to give a muted muzzle report, Perfect for quietly dispatching quarry.  The P15 comes with a fully adjustable two stage trigger and is also fully regulated giving tremendous accuracy and consistency. Due to the smaller size of the P15 and light weight we can see this rifle being perfect for target shooters and hunters who prefer to take standing shots.

The Artemis M11 is a full power bolt action multi-shot PCP rifle that offers high performance at a low price. The M11 is fully regulated offering 80 full power shots per fill and it is laser accurate due to its recoil-less action. The trigger is a two stage unit that can be adjusted to your shooting style. The M11 also comes with a split silencer as standard which will lessen the muzzle crack of the rifle, perfect for hunting scenarios. The M11 comes with an extremely sturdy wooden stock that gives the M11 a chunky look but the raised cheekpiece is also designed to aid the correct eye alignment to a scope. The grip is checkered to aid with grip in all conditions and the forestock is also grooved for a more comfortable hold. Plus with ample wood on the underside of the stock it is extremely easy to mount a bipod without any risk of cracking the stock.

Another massive advantage over every other rifle in the M11's class is the M11's built in double regulator system, not only does this eliminate the need to find the "sweet spot" in the M11's shot string but it also gives the M11 a colossal 200 full power shots per fill!

In total the M11 offers unparalleled versatility straight out of the box. 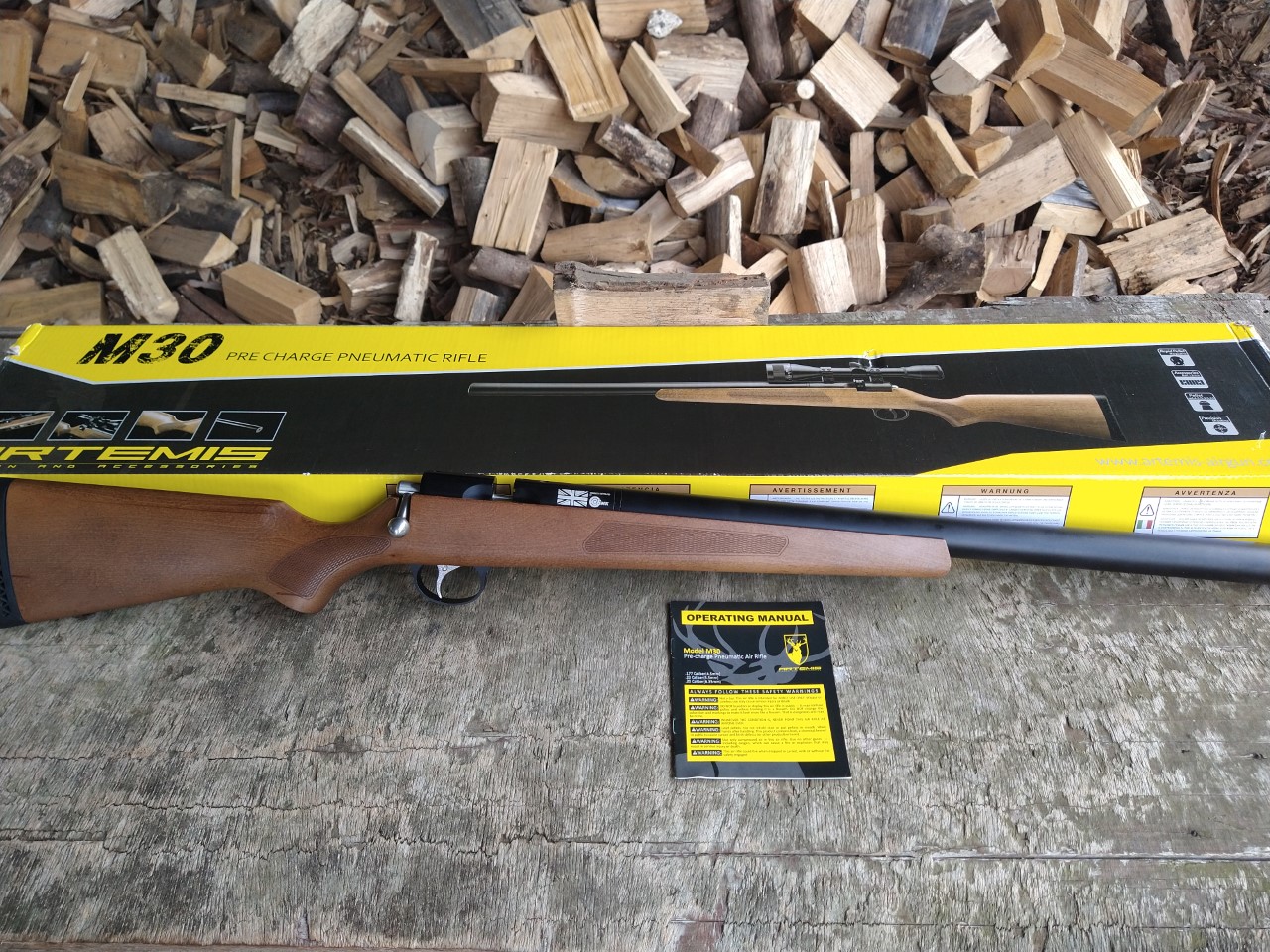 Possibly the most unique rifle on the market today, the Artemis M30 is a real eye catcher with both its looks and performance!

Not one to follow the crowd, the M30 comes with a very cleverly designed air cylinder that wraps around the barrel that gives the rifle its chunky almost centrefire-esque looks. This barrel also has another trick up its sleeve as the barrel itself is also baffled as standard making the muzzle report whisper quiet straight out of the box!

Having the cylinder wrapping around the barrel may leave many to expect the shot count to suffer however Artemis have gone another step ahead and fitted the M30 with their very efficient double regulator system, this keeps the M30 incredibly consistent throughout its entire shot band and boosts the shot count itself to 140 shots per fill!

Another very neat feature of the M30 is the additional regulator pressure gauge, with this along with the standard air cylinder gauge you can keep constant tabs as to exactly what the rifle and its regulator is doing, if the air pressure gets low and the regulator pressure starts dropping off then the shooter will know that the regulator cannot keep enough pressure to function and so the rifle will fire like an unregulated rifle. With this system the shooter has all the information that they could ever need!

The M30 also comes with a two stage adjustable trigger for better shot to shot consistency and accuracy.

The M30 comes fitted with a fantastic sporter styled stock with a low sleek cheekpiece and checkering on the forestock and grip.

A multi-shot magazine and single shot tray is included with the M30 which is guaranteed to keep the hunters and target shooters happy.

The M30 is a truly awe inspiring rifle to shoot and shoulder and it truly stands out from the crowd no matter what company it is put in with, and unlike many rifles on the market today it has the performance to back up the innovative looks!

Due to VCR act of 2006 it has become illegal to post Air Rifles and Pistols due to safety reasons. If there is an Air Rifle that you are interested in please send us an Email via our "contact us" section and we'll see if we can deliver the Rifle personally. Or alternatively if you would like to try the Rifle before you buy you can come to our premises and we can make you an outdoor range. Just let us know which rifles interest you and which would be the best day for your visit.